Gone, back in a week! Please feel free to look around.

Off later today for a week in Wales, all five of us Jenks - a bit of walking, cycling, swimming, damn buidling, sight seeing, etc. etc. Got to pack though, I hate packing. My family hate me packing too! I'm afraid I tend to get a bit ratty - I shall try to remain calm today.

Anyway, if you find yourself here (and it seems not that many people do) then please feel free to have a look around but please don't break anything. See you later ;-)
Posted by Jenks at Saturday, August 26, 2006 No comments: Links to this post

Lamps2udirect have lots of other types of energy saving replacement light bulbs including ones to replace golf ball bulbs, spots and there's even a dimmable sort that works with a regular switch. I've still had no luck replacing GU10 bulbs though and the golf ball replacements have a light that is not quite as warm as incandescent bulbs. The spots are good and you can get quite small energy saving bulbs now. If you need more convincing about changing bulbs take a look at ban-the-bulb . We placed an order for a range of energy saving bulbs and we're trying them in different places around our house. At this stage I can't see us changing all our incandescent bulbs but we're trying. If you have any suggestions of good replacement bulbs then let me know.

Energy saving lights are ideal for outside lights but please endeavour to purchase lighting that direct light downwards. A sky full of stars is both beautiful and awe inspiring - the natural world does not end at the horizon, it extends high above us. We really need to save the night sky for future generations. Have a look at the International Dark-Sky website for further inspiration. If you're passionate about nature and conservation, don't forget the stars above you.

I say this with a tinge of guilt - I still need to change our front light. With all the building work we are planning I've not got round to changing it , but I do keep it off. I suppose this saves energy but I could do this better with a PIR (Passive Infra-Red) sensor ... but I really must change it soon after our garage work is done and fit a PIR sensor.

Sorry but there was a big chunk missing from my earlier post - must be Gremlins in my Blog!
Posted by Jenks at Thursday, August 24, 2006 2 comments: Links to this post 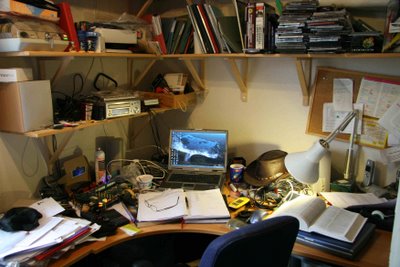 I took this photo a few days ago as a start to develop a blog that, hopefully, will be a bit more interesting than a few boring blue/grey dots! I'm not sure if I will use it but I thought it probably describes a fair amount about me (and how messy my desk gets). What surprised me looking back at it is how many little clues there are about some of my interests. Yes, my hat is on my desk but it's normally a bit further to the right - I can never figure out where to put it so it sits on my desk!
Posted by Jenks at Thursday, August 24, 2006 2 comments: Links to this post

Echinacea up my nose

I thinks I'm coming down with a cold or something - headache, sneezing, aching. My wife suggested I take some echinacea. They come in little capsules - bottle said take three, so I did.

One of the pesky things got stuck in my throat, I couldn't budge it not after comsuming gallons of tea and water. What do they coat those capsules with? Super glue!

Well just now the capsule must have decided to dissolve and a cloud of echinacea came back up through my nose ! Words can not describe how horrible the experience was - well, not my words anyway. Normally bad experiences are quickly forgotten but in this case the echinacea seems to have coated the inside of my nose - how on earth do you clear the inside of your nose? I wonder what my prognosis is?
Posted by Jenks at Wednesday, August 23, 2006 1 comment: Links to this post

but wait for it, in big yellow capital letters ...

'PLUS Patrick Moore's guide to Uranus'

Hmmm? They did it on purpose didn't they - surely they did?? Or is it just my infantile mind?

I can just imagine when my kids pick it up - lots of giggles.
Posted by Jenks at Wednesday, August 23, 2006 2 comments: Links to this post

What's that tune? Let your computer do the work.

This is of good novelty value - Tunatic is free software that you can download to your PC that identifies a song's title and artist from the audio alone. All you need is a microphone and internet connection and you're away.

In our family we started playing CDs to see how well it did, we were quite impressed though you do need to make sure that there is little or no background noise. Have fun ...
Posted by Jenks at Tuesday, August 22, 2006 No comments: Links to this post

Irritating, that's what its is. In this BBC article the author writes:

The astronomers were lucky enough to catch the collision just 100 million years after it occurred - the blink of an eye in cosmic time.

To contrast this a blink of the eye takes say 0.4 seconds. Let's assume that the average person lives to say 80 years, that would mean that a blink would be 0.00000000016 of a lifetime. Now we don't really know how long the universe will be around for, so let's just assume that we map one lifetime over the age of the universe to date.

So what would a cosmic blink be?

In fact, I'm always amazed to what extent the universe has developed when you consider how long cosmic events take.

Let me give you an example:
Many of the heavier elements both in and around us can only be created inside stars or as a result of supernovae (exploding stars). The age of our Sun is 4.5 billion years so our Sun has been around for about a third of the time that the universe has been in existence! That doesn't seem to leave much time for the universe to cool down after the Big Bang, sort itself out ... create a star, let the star burn for a while ... or maybe a long while, blow up the star, allow the debris to cool, gather and form a star (do this a few times) ... debris eventually gathers and our Sun forms. But the universe has only got 9.2 billion years to do this, quite a feat.

Furthermore, our Sun is about half way through its life expectancy of 10 billion years. So we couldn't quite fit the full lifetime of our Sun into the available time before our Sun was created. That means that we can pretty much say that the matter in our solar system has never existed in a star system with a star with the same mass or smaller than ours.

But what are the most common stars in the universe? Stars of our mass or smaller - there are more piddly stars than massive stars.

So it all fits neatly together, there is enough time and we don't need 'The Creation' to make it work - amazing! As for 'a blink of an eye' ... hmmmph!

Posted by Jenks at Tuesday, August 22, 2006 No comments: Links to this post

A happy snappy Jenks am I

I'm so pleased :-) Very, very pleased :-) I have a new camera a Canon EOS 30D with ... (drum roll) ... an image stabilsed lens. These lenses are wonderful as they allow you to take longer exposure photos without a tripod and without a flash. The result - lovely lighting for portraits, no harsh shadows, landscapes at dusk ... wonderful, wonderful, wonderful. When I've figured out how to get photos off the camera I shall post some. Happy, happy, happy :-)
Posted by Jenks at Tuesday, August 22, 2006 No comments: Links to this post