Da Vinci code and the dots on my blog

Having watched the end of a programme that debunked the book 'The Da Vinci Code' (I really can't be bothered to look up the name of the programme, I think it was on Channel 5), I just want to say that the dots on my blog have no significance. Neither do the missing dots that strangely make the letter 'L' on its side. This is a default, regular template that has dots on it.

I just wanted to clear this up before it was too late.

And the fact that I am saying this has no significance! <- and neither does that.
Posted by Jenks at Wednesday, November 30, 2005 1 comment: Links to this post

Deadly romantic - what happened? Where have all the people gone?

Ever since I popped a post on this blog about romantic love drying up my stats have dropped. Interesting as it's not even a serious posting.

It might be that males are being scared off by the subject of flowers and the word 'romantic' in the same posting.

It could be of course, the sight of flowers - makes my blog look a bit like an advert for a funeral parlour. Then again, it could just be that I have a deadly boring blog!

Needless to say, I will still continue to suffer the blogosphere with my postings.
Posted by Jenks at Wednesday, November 30, 2005 No comments: Links to this post

Has your Romantic Love run dry?

Well it seems from this BBC News article that romantic love is all down to a protein called NGF and sadly romantic love only lasts a year. Once this chemical has run dry so does the romantic love.

'Ahhhhh, now I knew that', many men will say but do women feel the same way? Does this mean that 'being romantic' has nothing to do with romantic love? So ladies, why the big problem with flowers? Surely the cessation of flowers coincides with the cessation of NGF - explained! It's not the fault of men, it's this protein thingy - it runs out, you see. Brothers, we have been absolved.

Alas, I fear not. I'm not sure that line of defense will work. Something tells me there is more to this, far more. Those flowers have a greater meaning. However, I will work it out one day, I will, I will ... But until then, better to play on the safe side and buy the flowers - oh dear, I haven't bought any recently!! Better pop out before my dear wife reads this ... 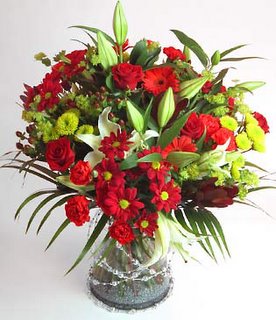 ... phew! My wife notes that it appears be men that have conducted the research - did nobody ever point out to them that they would never win the argument?!?
Posted by Jenks at Monday, November 28, 2005 No comments: Links to this post

A sentence with 'circular' in

My eight year old son had some spelling homework and one of the tasks was to think of sentences for each of the words. When he got to 'circular' he struggled a little and then came up with, "When you're pregnant you look circular!"
Posted by Jenks at Saturday, November 26, 2005 1 comment: Links to this post

Am I the only Dad that has an eight year old (he's got older since the last post) that is desperate to know my credit card pin number? He is fine when I draw money out of an ATM but he just can't control the desire to see if he can figure out my pin.

The other day (night actually) we were shopping at Tescos and he thought he'd figured out a few numbers of my pin, so he started shouting them out. This was pretty terrifying as it was quite late and they were filling the shelves (I know we should not have been finishing our shopping at 11pm at night with an eight year old in tow but sometimes ...), and you must know the kind of people that shop at 11pm at night ... (besides me, of course).

Now I know I should have got cross but if you could have seen his face you would realise that he really could not control his curiosity. So now I pretty much hug the keypad which probably makes everybody else in the queue feel rather uncomfortable. So if you are in a queue behind a parent with a sub 10 year old and he's hugging the keypad as he punches his pin in then you can probably relax - he/she doesn't think you look suspicious, unless you're shopping in Tescos at 11pm. By the way, he doesn't actually know my pin yet - I'm winning, yes!
Posted by Jenks at Friday, November 25, 2005 1 comment: Links to this post

When I was a boy I always wanted to see Tommy Steele at the London Palladium, I never thought that I would do so as an adult. Well, on Tuesday my eldest son turned 13 and we went to London to see Scrooge at the London Palladium. It has not received very good reviews but I do think that critics looked at this production in the wrong light.

It's not panto but it's not Les Miserables either. All my family enjoyed it. My youngest son is just about to turn eight and he came out the theatre and announced loudly:

That was brilliant! Much better than 'Chitty Chitty Bang Bang'.

I think that says it all.

This is a production to take your children to and it really can not go wrong because it based on a timeless story with a timeless message. So if you have children between 8 and 13 as I do, then I don't think you'll be disappointed. If you're looking for something more intellectually challenging then why on earth would you want to see a musical?

In fact it can't be that bad as on the first night (when the majority of the critics went along to the show) the show received a standing ovation from about 80% of the audience. I noticed that even Andrew Lloyd Webber was standing but I suppose he might have some vested interests. Although I did think that the standing ovation might not go down too well with the critics - probably the other 20% of the audience! They probably felt like they should have stood but couldn't and that would have made them feel all the more bitter and irritated - we English are so strange. Having said that, I'm not sure the production quite deserved a standing ovation but who cares ... only critics.

I suppose I should give you links to the critics but I don't think it is worth the bother - with this particular production they serve little purpose as they failed to see what 'Scrooge' is. I think it best to end by saying that my family enjoyed it and as Charles Dickens said of his story, 'A Christmas Carol':

I have endeavored in this Ghostly little book, to raise the Ghost of an Idea, which shall not put my readers out of humour with themselves, with each other, with the season, or with me. May it haunt their houses pleasantly, and no one wish to lay it.

Their faithful Friend and Servant,
C.D.

May the ghost of Charles Dickens haunt all those sad critics this Christmas ...


Posted by Jenks at Friday, November 11, 2005 No comments: Links to this post

Well, after watching Question Time I'd say that the Conservatives are out of touch if they vote in David Cameron - I just don't think they will win with him as leader, not in the next election anyway.

David Davis is a fresh alternative. Last night he seemed calm and confident. His answers to questions were both considered and knowledgeable, and he seemed very calm and composed without being arrogant. I partly agree with Clive Davis when he says:

More to the point, they both came across as human beings, which is a rare feat for Tory politicians.

I think that Cameron was too Blair-like. Don't get me wrong, I'm not that against Blair but in this time of fashionable politics I'd say that Cameron is 'so last year'. With Davis leading the Conservatives I 'might' even be tempted to vote for them ... but not if they are going to waste more time on discussing hunting, but that is another topic for another day - perhaps.

Davis might not only win the Conservatives the next election, he might win a few people back to politics. I think a Brown/Davis clash would be good for politics - they both seem to have an honesty that would be truly refreshing.

Posted by Jenks at Friday, November 04, 2005 No comments: Links to this post